'A MEMORY IS BETTER THAN NOTHING'


Our Rating:
Read anything about the Class of '77 and the Punk movement and there's one singular character who rarely even merits a footnote. I'm talking, of course, about Dan Treacy, leader of the legendary TELEVISION PERSONALITIES: a band whose naïve, often amateurish approach to making music was borne of major pop fandom and taking the 'anyone can do it' philosophy of Punk to its' logical extremes.

Dan has, of course, made up for lack of sales and a non-existent commercial profile with serious recognition from the underground music fraternity. Creation/ Poptones supremo Alan McGee has worshipped Dan for decades, while influential figures as disparate as Kramer, J. Mascis, The Horrors and Spacemen 3's Sonic Boom have waited reverentially in line outside of his dressing room when the TVPS have rocked festivals around Europe. Actually, while we're dropping names, let's not forget that Kurt Cobain also elevated the TVPS to the status of one of his very favourite bands.

It's this groundswell of goodwill which has nurtured Treacy through the sort of harrowing times most of us only read about. The TVPS' often whimsical, psych-inflected pop has told of knowing where Syd Barrett lives or of Dan confessing to a love of The Bomb, but the reality of his life has been way harder. Before his 2006 'comeback' 'My Dark Places' on Domino, he'd endured spells of homelessness and prison for shoplifting offences due to his heroin dependency. If the worrying press release that accompanies this album is to be taken at face value, Treacy isn't out of the woods by any stretch of the imagination. It suggests he's recently had further near brushes with eternity via a series of overdoses.

With all this in mind, one can only hope that this won't be the last time we're confronted with an all-new TVPS album. If it is, 'A Memory Is Better Than Nothing' supplies a bleak, resigned epitaph and there are certainly moments here when you do fear critically for the state of Dan's mental health. 'Walk Towards The Light', for example, features a frighteningly shaky vocal which makes Pete Doherty sound focussed, while the confessional lyrical content (“These days, I wish I was somewhere else instead of inside my head”) verges on the uncomfortably honest. 'My New Tattoo', meanwhile, opens with a determined, spangly guitar riff and threatens to be the record's star power pop moment, but ends up churning on relentlessly and jettisoning the plot long before it winds down. If I'm being kind, it recalls scabby, unfinished 'masterpieces' like Syd Barrett's 'Madcap Laughs' or Alex Chilton's 'Like Flies on Sherbet', but if I'm not I'd say it was the sound of an imminent breakdown.

Of course everything's relative. You wouldn't expect 48-track studios and slick session players on a TVPS record and sometimes it's Dan's very lack of professionalism which gets him through. On the title track, he marries his typically seat-of-the-pants pop enthusiasm to a surprisingly beefy chorus and comes up smelling of roses and sporting a massive, shit-eating grin. 'The Girl In The Hand-Me-Down Clothes', meanwhile, is Dan at his wistful best and the brilliant 'She's My Yoko' pits bald autobiographical content (“I've been mad, I've been bad, I've been glad and I've been had...and that's me, that's Daniel”) with an unlikely, air-punching chorus which can't fail to make you smile in spite of yourself.

Hearteningly, the album concludes with a streak of positivity I hope Dan will be able to nurture. 'All The Things You Are' (“it's actually not that far to get to where you want to be”) is a touchingly gentle ode to love and at least something approaching happiness aided and abetted by some lovely cor anglais, but it's the closing 'You Freed My Spirit' that's the one. Rarely have I heard a performer as naked and vulnerable as Treacy is here, but his message of love (“when I felt so down, cast aside like a waste of time/ you came along...you're the only one who doesn't throw in the towel”) is almost beyond touching. If it's the sound of redemption, well it doesn't get more warm and human than this. It does my heart good to hear Dan leave us in this state of mind.

So that's all for now folks. As with all TVPS releases, it's impossible to say when or where Dan Treacy will show up next. Recent reports of chaotic gigs are another reason to fret, but at least they serve notice that Dan remains with us. Next time, I'm crossing my fingers for a TVPS album written and performed by a Dan Treacy enjoying rude health. I hope to God I won't find myself trying to put my arms around a memory.
"trawling the net so you don't have to"

Here's the full track listing for the album..Title (writer):

Email me at tvpsofficial@yahoo.com if you would like to hear a sampler.
Top 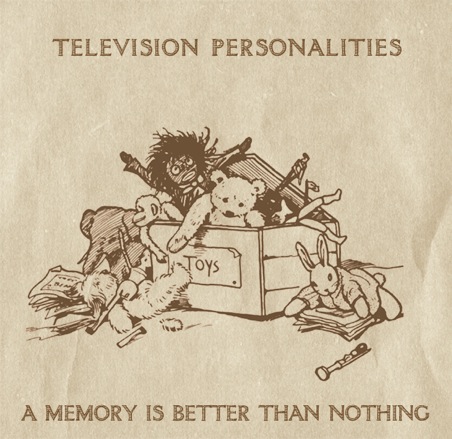 did you get my e-mail?
"trawling the net so you don't have to"

Paul Groovy wrote:did you get my e-mail?

Er..no. To which address did you send it?
Top

Another review of the new album...

3 stars out of 5 in the new issue of Uncut.
"trawling the net so you don't have to"

Sometimes pop music surprises me. Who would have thought MGMT were big Television Personalities fans? I was shocked to see they had included A Song for Dan Treacy (on their new album Congratulations), and it made me smile to think of their fanbase searching Google to find out more about him. In the same way that Kurt Cobain introduced the world to Daniel Johnston, the song will have introduced many people to Treacy and hopefully persuade them to purchase the incredible Television Personalities back catalogue. A Song for Dan Treacy is an excellent example of a band jamming to promote, not destruct.

There is a bona fide musical cult surrounding Treacy, and MGMT certified their love by getting him to play on their tribute, making this the first time he's been in the top 10. And he deserves to be there. Treacy's influence has hit far and wide: whether on the MGMT tribute or on the Libertines, Arctic Monkeys, Black Dice and, yes, Creation Records. Don't kid yourself in thinking his cult is meaningless. You almost certainly own a record heavily inspired by Treacy. He's a post-punk Burt Bacharach, and his influence is nothing short of incredible.

With his new album A Memory Is Better Than Nothing, Treacy has proven once more that he is the real poet laureate of working-class London. A Memory Is Better Than Nothing portrays the manifesto of living in the gutter but looking at the stars. Treacy demonstrates the beauty of the everyday with the track, Girl With the Hand Me Down Clothes. Like so many of his other songs, it tackles heartbreak (albeit with a fantastic string arrangement) but this track is also a celebration of everyday people. Treacy's eye for detail brings a painful Ken Loach-like honesty to the music.

Not all is dark, however. On the psychedelic People Think We're Strange, Treacy retains his reputation as pop's post-Syd Barrett jester. It provides relief from the heavier tracks and is excellent, deranged fun. Funny He Never Married builds on the Phil Spector-esque production of previous numbers, as Treacy sings in a breathless falsetto. A Memory Is Better Than Nothing could sound like a summer holiday in someone's emotional destruction, yet it doesn't.

Treacy doesn't drown his songs in self pity, instead he looks for the hope in a hopeless situation. On this new album, we find the cult songwriter doing what he does best – playing from the heart. Surely this makes Treacy the last real bluesman in England.
"trawling the net so you don't have to"

and for Evertt True's take on the album visit his blog here...

This should be the right link:

Too Cool To Die is basically a re-hash of Alan McGee's blog...