Here's a flyer for the first gig by my new band THE DEMI-MONDE!
The sound has a psychedelic feel with a blend of electronic and acoustic sounds, as well as a pan-european folk influence and Indian and Moorish elements. Contributing musicians include Lee McFadden (Alternative TV and Angel Racing Food), Jane Ruby (Naked Ruby), singer Catherine Gerbrands, and violinist Phil Martin (Long Decline, Bitter Springs),

I hope you can make it. I promise a mind-bending experience.
Fondest regards, Jowe 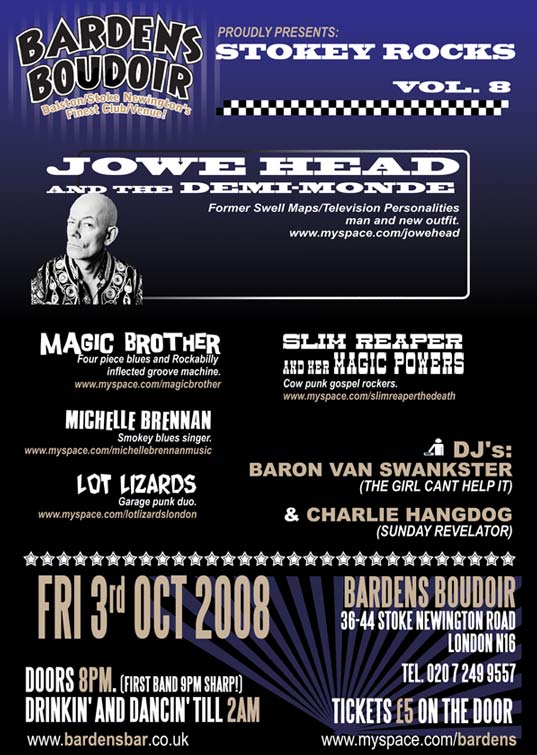 Reminder from Jowe - the Bull & Gate gig is this Saturday:

The Demi-Monde and myself and are on first, under the guise of Valerie and her Week of Wonders backing Catherine, who is one of our singers. We also play last with our headlining set, with me sidling sideways to the centre of the stage!

Jowe Head and The Demi-Monde

Nigel Burch and the Flea-Pit Orchestra

Valerie and her Week of Wonders

There's one this week!

"...(the Rude Mechanicals) play with a commitment and ability that results in favourable comparisons to their admitted influences Frank Zappa and Captain Beefheart. Their live set simultaneously leaves new converts petrified, quizzical, musically refreshed and convulsed at the bizarre outrageousness of it all..." Lee McFadden, The Morning Star

" ...my latest discovery, Rude Mechanicals, ...a head-on collision between James Brown, The Cramps & Japanese Noh Theatre, that had everyone on the dance floor."..
MC Rebbe, the Rapping Rabbi

JOWE HEAD AND THE DEMI-MONDE

"Jowe Head has continued to push the creative envelope to the very limits of its conception since joining Swell Maps in the late 70s. He & his cohorts have subsequently been blamed for the whole shebang/movement we lovingly refer to as DIY/Lo-Fi." www.trakmarx.com
"Jowe Head is backed by a new band called The Demi-Monde ...The sound has a psychedelic feel with a blend of electronic and acoustic sounds, as well as a pan-european folk influence and Indian and Moorish elements." www.televisionpersonalities.co.uk

POLTERGROOM
"Then it was time for Poltergroom, the definite highlight of the evening for me. It was a hell of a lot of fun. Fast... original, with lively guitar playing and an interesting drummer. They looked like they were having fun as well." counterfnord.wordpress.com

"Poltergroom are fire and brimstone, Waynes World limited edition stratocastor, creating creepy, scratchy classic rock witchcraftery..."
www.copsandrobbers.net
"Bare chested and with witch’s hats pulled down firmly below the eye line Poltergroom are a trio from London featuring members of Cleckhuddersfax and Man Aubergine. They are pioneers of the cleanest guitar sound and primal ululation." www.bigwowbadges.com

SOUND OF THE SUN (formerly known as SUPERSTRINGS) with IAN WATSON

“Glorying in the destruction of improvised rock” The Wire Magazine

" this improvising trio have already collaborated with Fred Frith, Geoff Leigh, Karl Blake and Hand of Glory amongst many others ...and seem intent on ripping the guts out of any conventional notion of genre. Over Simon King's effect-laden sound-scapes and Paul May's clattering percussive deconstruction, Atsuko Kamura's intensely emotion vocalisation takes the audience somewhere they have never been - whether they like it or not!" Resonance Radio 104.4 FM
Top

Greetings, o ye of discerning taste-buds!
I bring you tiding of great joy:
On Sunday 7th February
The LINES
JOWE HEAD & ye DEMI-MONDE
VALERIE & her WEEK of WONDERS
Play a gig together at The Bull and Gate, 389 Kentish Town Road, London NW5-2TJ
£5 or £4 with a flyer
Live music starts at 8.45
There's a quid of if you bring a flyer (see one of the attached)
regards, Jowe 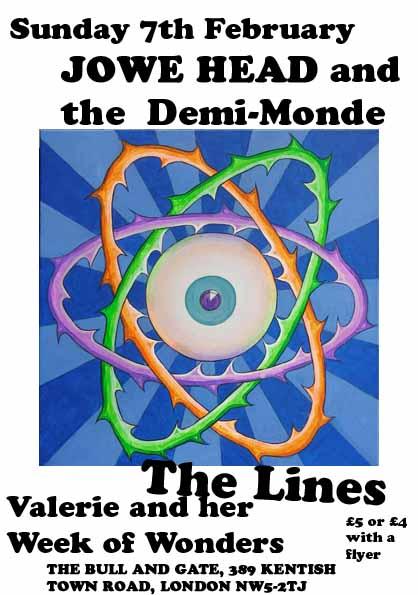 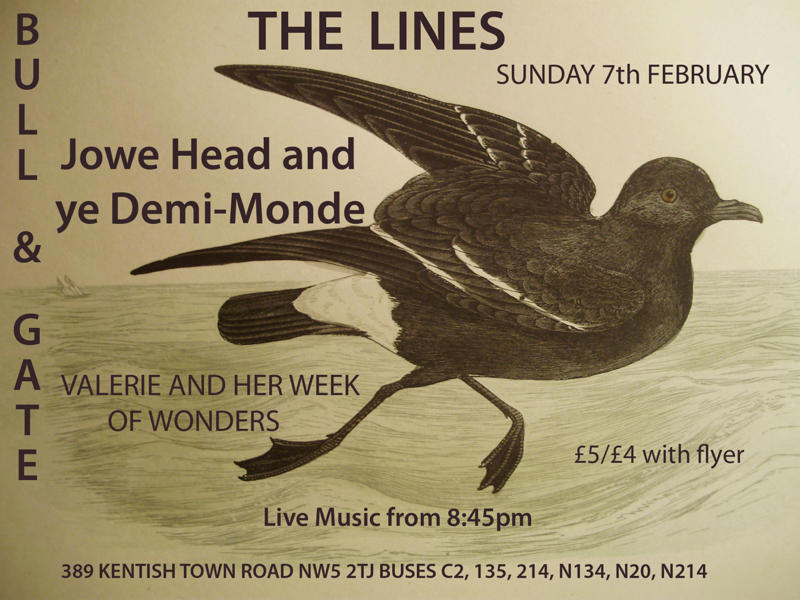 Nice video clip of the song "Cyan Eyes" from the gig here:

Jowe Head and the Demi-Monde will be supporting The Clean at the ICA in London on Wednesday 19 May 2010. 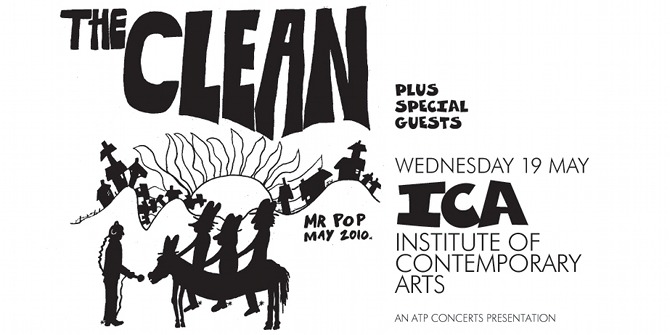 The Demi-Monde play their first gig of 2012 this week.

Also appearing: The divine MISS ROBERTS & COS (from the awesome Rude Mechanicals) 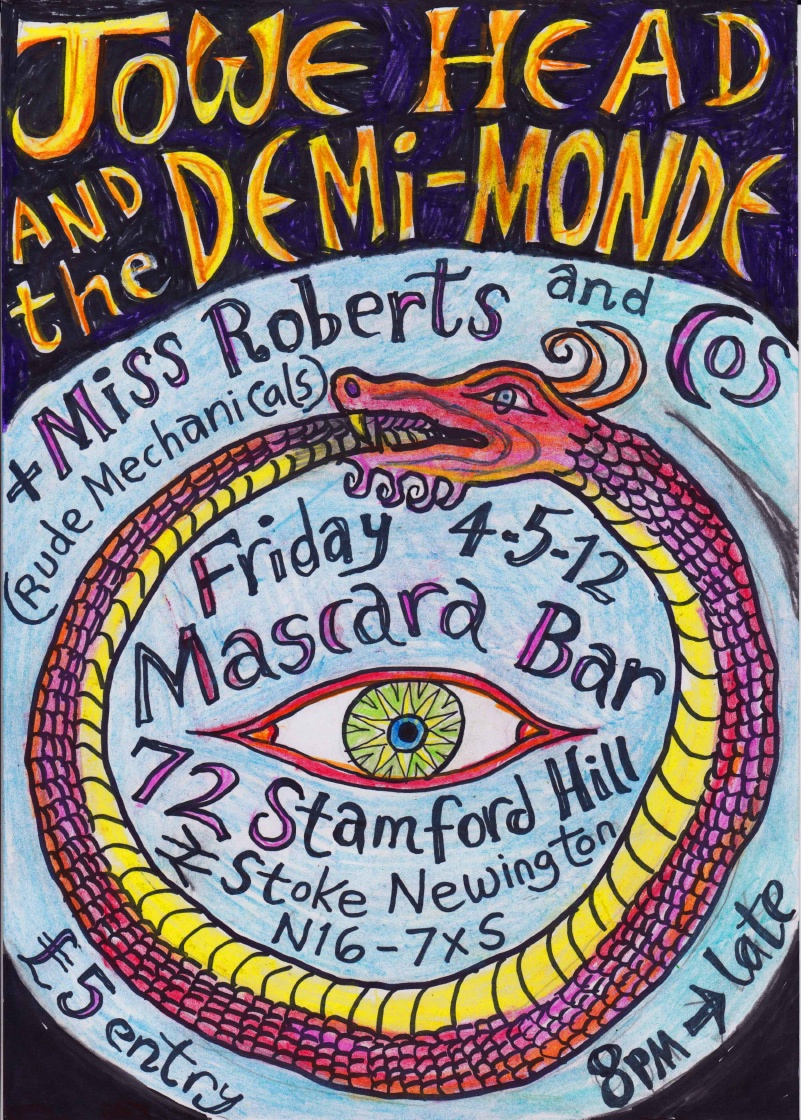