Television Personalities
Television Personalities are fronted by the now almost god-like king of DIY indie-pop and punk-psychedelia decadence Dan Treacy. Renowned for shoe tapping shambolic sing-a-long perfection, the TVPs go from strength to strength having just returned from a European tour; spurring MGMT to compose ‘Song For Dan Treacy’ which has been going down a treat in their live performances. Catch them in this intimate venue while you can.

Scrappy Hood
Scrappy Hood (of Milk Kan fame) combines anti-folk lyrical sensibilities, and anthemic pop melodies, spiked with some hip-hop and blue-grass for good measure. His urban poetry is formed of the nostalgic, comedic and often controversial observations of a reformed public transport busker… And if we are lucky there may even be a special guest appearance from Jimmy Blade.

Corporal Machine and the Bombers
If Sonic Youth picked up a brass sectioned and played as the house band in a rock karaoke Block Heads special, then I think it might be comparable to Corporal Machine and the Bombers’ live performances. They are guaranteed to leave you grinning like you cleaned your teeth with piss for up to one and a half hours after the show; or your money back.

Woog Riots
Woog Riots are soon to be in your top three German bands of all time, this much I promise you. Their songs are a charming twee take on lo-fi disco, and it’s an absolute sin that you have not heard of them yet. 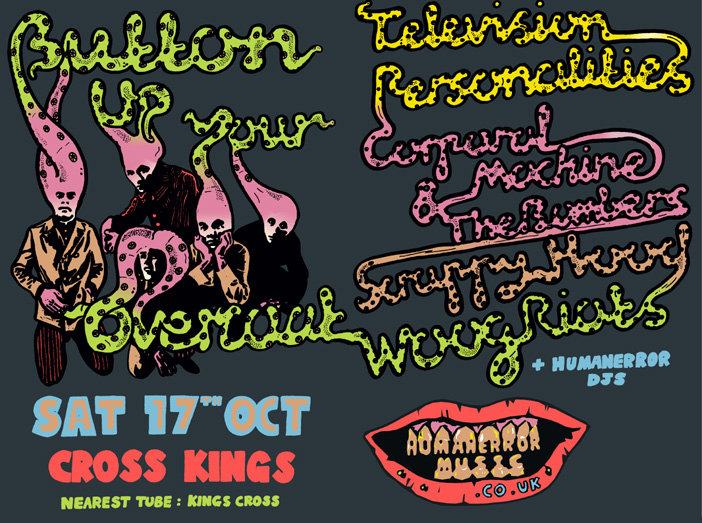 Thanks for posting, see you Saturday
Top
Post Reply
2 posts • Page 1 of 1